The bladder is the most common site of cancer in the urinary system.  It tends to occur more frequently in men than women, and the risk increases with age. The majority of bladder tumours can be managed by minimally invasive techniques.

What are the symptoms?

What are the risk factors?

What are the investigations?

Investigations are aimed at diagnosing the bladder cancer and determining how advanced it is (staging and grading). 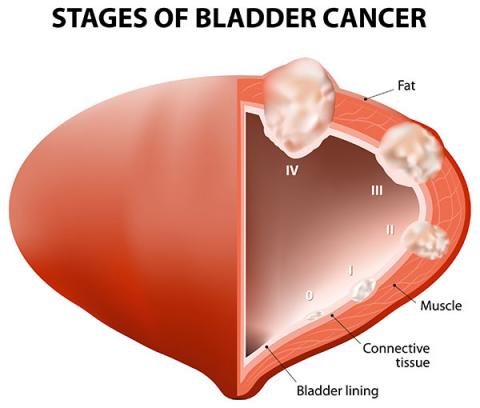 Once a bladder cancer has been found, then the process of staging is performed. This essentially works out how “big” the cancer is both locally and whether it has spread to other parts of the body. The most common stages of bladder cancer can be seen in this Diagram.

The critical staging is how deep the bladder cancer has penetrated the bladder wall. If it has not grown into the muscle layer it is commonly regarded as superficial, and has a much better overall prognosis. If, on the other hand, it has grown into the muscle layer or deeper, it is regarded as invasive, and therefore more likely to require more aggressive treatment and more likely to recur.

CT Scans are often performed to examine the lymph nodes, liver and chest – all possible locations for the spread of bladder cancer.

The most important test is a cystoscopy, during which bladder biopsies of suspicious areas may be done. If there is an obvious bladder cancer, this can be resected, that is, removed and the specimen sent off for analysis by a Pathologist. This analysis can determine how aggressive the cancer cells are (this is the grade of cancer). This is an indication of the likelihood that the cancer will recur or progress. Subsequent treatment is influenced by these risks.

What is the treatment of bladder cancer?

This depends on whether the cancer is superficial or invasive, as well as the risk of possible recurrence. Superficial and invasive tumours require different options.

Most superficial tumours only require long-term surveillance, to allow recurrences to be treated in a timely manner. After the initial diagnosis and removal of the tumour surveillance cystoscopy is performed 6-12 weeks later (depending on the pathology of the tumour). Thereafter a regime that extends to 6-month surveillance to finally annual checks.

Whilst this sounds a very worrying treatment it is not like your usual concept of chemotherapy. This treatment is reserved for those people with superficial disease that are judged as to be at high risk of further recurrences. This includes people with multiple tumours, many recurrences over time or pathology such as carcinoma-in-situ (CIS). The latter is of particular concern as it has a high association of future development of invasive bladder cancer. The most common agent used in this therapy is BCG (anti-tuberculous vaccine) though other agents are used as well.

This is major surgery that removes the bladder as well as the pelvic lymph nodes. This is for people in whom the cancer has grown into the bladder muscle and possibly beyond. Occasionally it is offered to people with more superficial disease who have failed multiple courses of intra-vesical chemotherapy. After a cystectomy the urine is drained from the kidneys either to a neo-bladder (a reconstructed bladder using bowel) or to an ileal conduit (external drain to a collection bag).

External beam radiation is also used for the treatment of bladder cancer (it is a “radio-sensitive” tumour). It does have a recurrence rate of about 30%, in which case some patients may require a cystectomy after all. It has been used in combination with formal chemotherapy with good effect.