Transrectal Ultrasound-Guided Biopsy of the Prostate

Transrectal ultrasound-guided (TRUS) biopsy of the prostate is the technique by which the prostate is sampled for pathologic analysis to determine the presence (or not) of prostate cancer.

Men in whom there is a suspicion of prostate cancer are usually offered the opportunity for prostate biopsy. This usually occurs in one of the following circumstances:

What happens during the procedure? 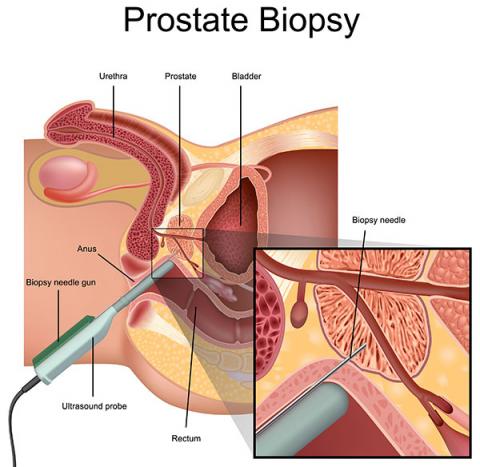 Most men will have a light anaesthetic for this procedure in this practice. This allows the biopsy to be performed in a completely pain-free manner, and as there is no discomfort the patient does not move - allowing more accurate biopsies to be performed.

An ultrasound probe is inserted into the rectum allowing the prostate to be imaged. A special biopsy instrument is used to take small “sealed” cores of prostate tissue that are the sent to the Pathologist for analysis. A standard pattern of 12-16 cores is performed, with extra cores often being taken from areas of suspicion as seen on an MRI scan.

A cystoscopy (telescope inspection of the prostate and bladder) is often performed at the same time.

Are there any possible side effects?

Most procedures are straightforward. Although the complications listed below are well recognised, most patients do not suffer any problems.