Prostate cancer is the most common malignancy found in men. More than 19,000 men are diagnosed with the disease every year. It is more common in older men, but it is a re-assuring fact that many men do not need any treatment if they have prostate cancer as it can take a very indolent course.

The expression “most men die with prostate cancer than of it” is a true one. However, there is a need for some caution as it is also true that as many men die because of their prostate cancer as women die of breast cancer – therefore you cannot automatically ignore prostate cancer. It is important men seek appropriate information and counsel on how to manage their particular type of prostate cancer.

Are there any risk factors for prostate cancer?

The following are the known risks for developing prostate cancer:

What are the symptoms?

One of the biggest problems of prostate cancer is that it rarely gives any symptoms – especially in the early stages of the disease. Most urinary symptoms are due to benign prostate problems. Symptoms when they are occur usually do so when the cancer is more advanced.

Two symptoms that do warrant some consideration and investigation (though the vast majority of men with these symptoms have them for innocuous reasons) are:

How is it diagnosed? 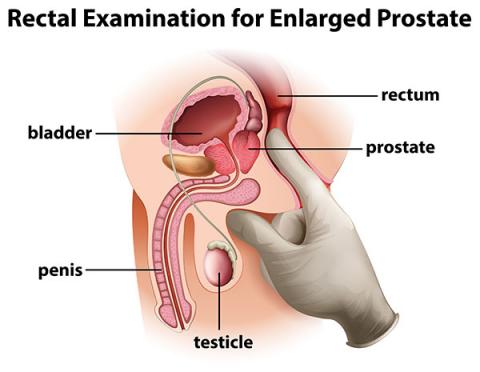 The majority of men have their prostate cancer suspected in the following circumstances:

The diagnosis itself is only made after a prostate biopsy has been performed. Your doctor will discuss this procedure with you when he recommends that this is necessary. Learn about Transrectal Ultrasound Biopsy.

What happens if I have prostate cancer?

Your doctor will discuss the results of the biopsy with you and the significance of the prostate cancer you have developed. Two of the first things he will discuss are the Gleason Score of your cancer as well as the Staging of your cancer.

After you cancer has been staged and categorised the various treatment options will be discussed and suggestions as to the best one for you will be made. You must remember that all decisions concerning what option to pursue are yours and you should not feel pressurised to proceed at a pace and way that suits you. The doctor will be happy to support you in anyway and provide as much information as you require to be comfortable with your decision.

When the Pathologist discovers prostate cancer cells in your biopsy, he assigns them a score that tells us how aggressive is the type of prostate cancer you have developed. For all sorts of reasons this score ranges from 6 to 10. The actual score is made up of two separate scores out of 5 – being the two most common patterns of the cancer in your prostate. A score of 6 is a very slow growing type of tumour and the majority of men will be able to safely “watch” their prostate cancer as it only has a low chance of progression. On the other hand a Gleason score of 10 would indicate the cancer is very aggressive and highly likely to progress and spread to other parts of your body. 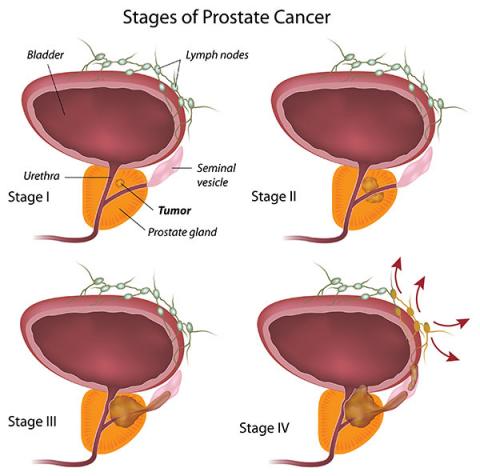 The stage of a cancer is a method of describing how big the cancer is and how far it has spread. The most common staging system for prostate cancer is the TNM system – but most references are usually to the “T” component – that is the tumour size and local spread.

The doctor may also recommend you get some standard “staging investigations” to see if your prostate cancer has spread beyond your prostate. These include:

What treatments are available for prostate cancer?

The treatments offered for prostate cancer depend on whether the cancer is localised (confined to the prostate) or advanced (extending beyond the prostate either locally or to other organs – that is metastasised).

This is an option is your cancer is low grade and low volume, hence representing only a low chance of progressing within your lifetime. Some younger men will be enrolled in a database (the PRIAS database), which is a multinational observational study to follow-up on all men managed in this manner. There are different surveillance protocols and which one is used in an individuals case depends on a number of factors including age, extent of disease and patient wishes.

All protocols have as a minimum regular PSA checks (every 3 to 6 months at least). Often repeat prostate biopsies are scheduled at different intervals, though the availability of accurate prostate MRI also means this is a genuine alternative.

If there is any change in the status of the disease then definitive treatment may be necessary. 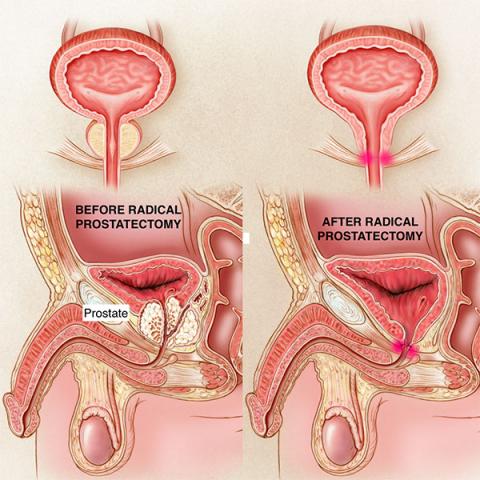 One of the treatment options for prostate cancer is “radical prostatectomy” – this involves the removal of the prostate, seminal vesicles and usually some of the pelvic lymph nodes. The term “radical” in a medical sense refers to surgery performed to completely remove a cancer – it sounds quite concerning but is nothing more than the extent of surgery as will be described by your doctor. Once this has been done, then the bladder is anastomosed (re-attached) to the urinary sphincter so as to re-establish continuity in the urinary system.

The main issue with surgery is the potential side effects. At least 50% of men will suffer from some form of erectile dysfunction following the procedure (whichever method is used). Some series report even higher incidences. Incontinence can also be an issue though its incidence is much lower – approximately 5%. Both conditions can be treated.

The operation is usually performed one of three ways – though all aim to achieve exactly the same outcome, and there is no difference between any of them and the treatment of the cancer.

This is the “gold standard” operation to treat prostate cancer. It usually involves an incision below the umbilicus (belly button) and the prostate is completely removed. Hospital stay is usually about 3 days. Long-term results are based on this method of surgery and it has proven reliable in terms of its cancer results.

This technique results in the exact same outcome as the original operation. The advantage is that a number of very small incisions can be made to perform the operation – so called “key-hole” surgery. The robot allows much more intricate and exact manoeuvres to be performed during the surgery, making for better overall efficiency and precision in the surgery. The ‘robot’ allows to surgeon to see the area in a magnified way and perform the same steps as in an open operation. Recovery is possibly a little more rapid, though the side effects (see below) may be slightly more likely. This option is definitely the way of the future.

This is another “key-hole” technique. It is performed utilising traditional laparoscopic tools and essentially is the operation that inspired the move to robotic assistance. Not offered much any more as the robot is definitely superior.

There are two predominant types of radiotherapy used in the treatment of prostate cancer – external beam radiotherapy and brachytherapy. Overall the side effects are lower than those of surgery, in particular erectile dysfunction and incontinence, but both are possible. Occasionally there can be some late bowel irritation from radiotherapy, though this is much less likely with present day techniques.

Prostate cancer is sensitive to radiotherapy and has proven to be very effective – especially with the new technology that allows higher doses to the prostate without compromising surrounding tissue. A typical course of external beam radiotherapy last approximately 6 weeks. Apart from the time needed to go to the radiotherapy department there is little interruption to normal activities. Urinary and bowel symptoms, usually mild can be present for a few weeks after completion.

This involves the implantation of small radioactive seeds within the prostate. They become inert over the few weeks after insertion, having delivered the required radiation dose. This form of radiation is usually reserved for men with Gleason grade 6-7 prostate cancer and a PSA level ≤ 10ng/ml. This form of radiotherapy has very high success rates and a low complication rate. Recovery is also rapid as it is a minimally invasive technique only requiring an overnight hospital stay.

This radiation technique is usually offered to men with more aggressive forms of prostate cancer – Gleason grade 8-10 or where there is a high suspicion of local spread beyond the bounds of the prostate. It is usually performed in two segments – special needles are inserted into the prostate that allows high dose radiation to be delivered to the prostate alone. There is usually an overnight stay in hospital for this component. Following this “needle radiation” a booster dose of external beam radiation is delivered over the next few weeks.

The term advanced prostate cancer refers to that disease that has extended beyond the bounds of the prostate. It can be locally advanced, that is, spreading into that area that immediately surrounds the prostate e.g. seminal vesicles, the bladder, surrounding fat and occasionally beyond.

The cancer can also have spread beyond the local area – usually to lymph nodes and bone, but can on occasions spread to other areas such as the liver and the brain.

High dose rate brachytherapy or external beam radiation are often used to treat the locally advanced disease. The most common form of therapy is androgen deprivation.

This is often called hormone therapy, though in fact, no hormones are actually given these days. The prostate is uniquely sensitive to male hormones, in particular Testosterone. Drugs known as LH-RH agonists are administered as depot agents – this means they only need to be administered every 3-6 months. These drugs essentially tell the hypothalamus (the central control centre in the brain if you like) to stop the manufacture of testosterone in the testes – the chemical equivalent of castration. This essentially starves all prostate tissue of hormone and it shrinks – whether it is in the prostate or in other tissues. The vast majority of men respond to this type of therapy, though eventually they do become resistant. Side effects can be annoying though are not usually severe, they include hot flushes, fatigue, weight gain and susceptibility to osteoporosis. Your doctor will discuss these with you.

Recently a number of chemotherapy agents have become available to treat prostate cancer that has become castrate-resistant. These drugs include Abiraterone, Enzalutamide, bisphonates and radium-223. They have been proven to benefit may patients when required with relatively few side effects.